HeartMob is a community dedicated to offering support to people experiencing online harassment. The platform allows individuals to share their stories and receive support from vetted and trustworthy bystanders who can help in the form of supportive messages or by reporting or documenting abusive content. Our goal is to reduce trauma for those who are facing online abuse while at the same time empowering bystanders to act. (Learn more abouthow HeartMob works here)Two recent studies have shown that HeartMob is an evidence-based promising practice in addressing online harassment. The first, "Classification and Its Consequences for Online Harassment: Design Insights from HeartMob”, (2017) conducted by Lindsay Blackwell, Jill Dimond, Sarita Schoenebeck, Cliff Lampe, revealed that Heartmob users felt validated when their experiences were accepted and labeled as ‘online harassment’ within the platform. 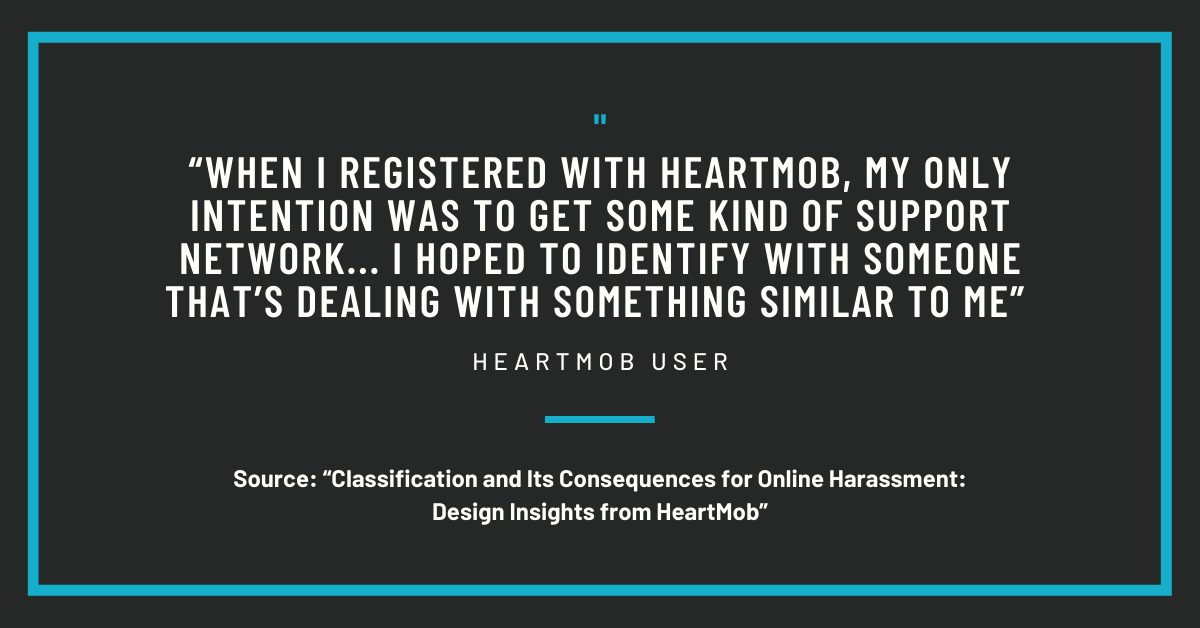 The study, in which 18 users were interviewed, showed that “a system for categorizing submitted cases according to specific harassment behaviors and their impacts could help connect isolated users with the support they need most”. Participants agreed that Heartmob allows them to connect with users who can empathize with their experiences or who understood the impacts of their situations. One user said:  “When I registered with HeartMob, my only intention was to get some kind of support network... I hoped to identify with someone that’s dealing with something similar to me”

The study also showed that “labeling abusive behaviors as ‘online harassment’ enables bystanders to grasp the scope of this problem” and encourages them to give support. “HeartMob is a brilliant way of addressing a problem that I think immobilizes most people, because it seems so big and daunting—so they don’t do anything at all.”, said one user.
The research also showed that labeling harassment as “unacceptable is critical for surfacing norms and expectations about what is and is not acceptable behavior”.

The second study, a program evaluation of Heartmob, was conducted in June 2021 by Germain Impact Solutions, and also showed that  64% of users who have experienced harassment reported that the platform was very helpful or somewhat helpful in making them feel connected to, and supported by, others. It made them feel less isolated and alone. One participant said: “The awareness that my case was not unique [was helpful]– this is something that happens quite often – and in some bizarre way that was helpful. Seeing that there is such a large community who have survived these cases.” The study revealed that 57% of people who have experienced harassment reported that HeartMob was very helpful or somewhat helpful in healing from their trauma. “I was getting exhausted from this harassment. My harassers were like insects, they followed me like bees. HeartMob helped me to alleviate that”, said another participant. 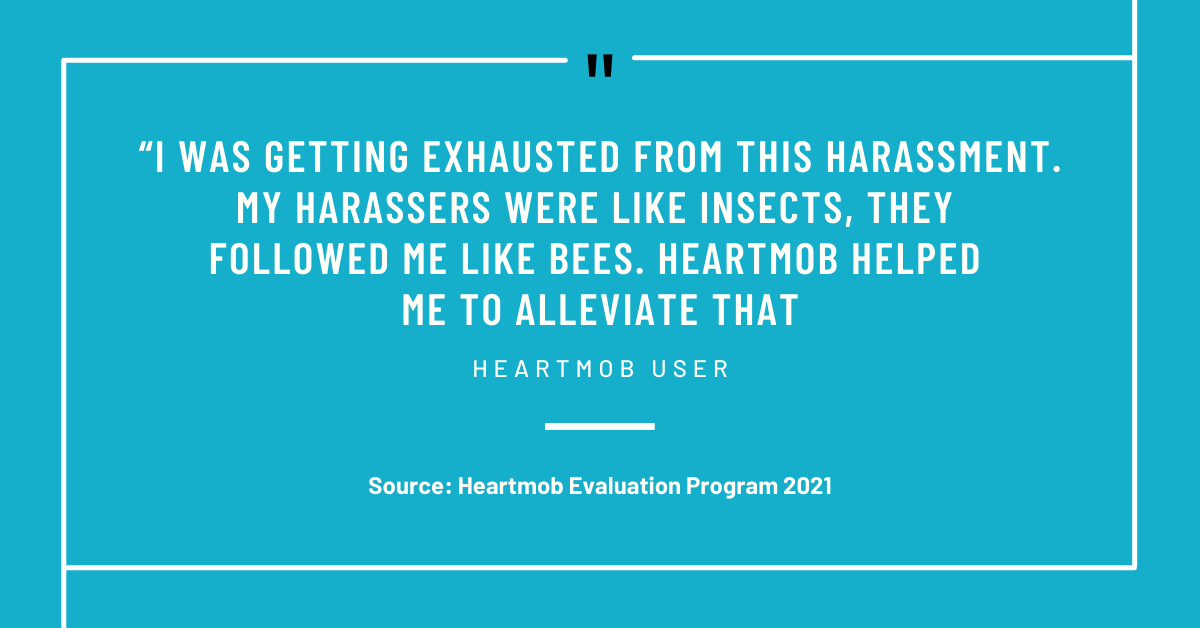 About 53 % of people who have experienced harassment said that being part of a community is one of the aspects they get the most value out of the platform, while 44 % said it was seeing other people’s stories and 37 % said getting access to resources. Another 76 % of bystanders found value in sending words of support, while 73 % appreciated reading other people’s stories, and 67 % appreciated being part of a community.

Some users concluded and agreed that there is nothing else like HeartMob. It “fills a much-needed gap for information and support. There may be other legal information out there, but this is the only thing that feels human-centered and interested in wellbeing.”

For people who experienced harassment who now support others, supporting others on HeartMob can also be a way of building resilience: “The value is very high because it provides me an opportunity to be able to directly help current victims of something. My biggest draw to it is the potential to directly make a difference in people’s lives. That helps me be willing to wake up on a day-to-day basis knowing what can actually help turn my experience into something because of the power.” 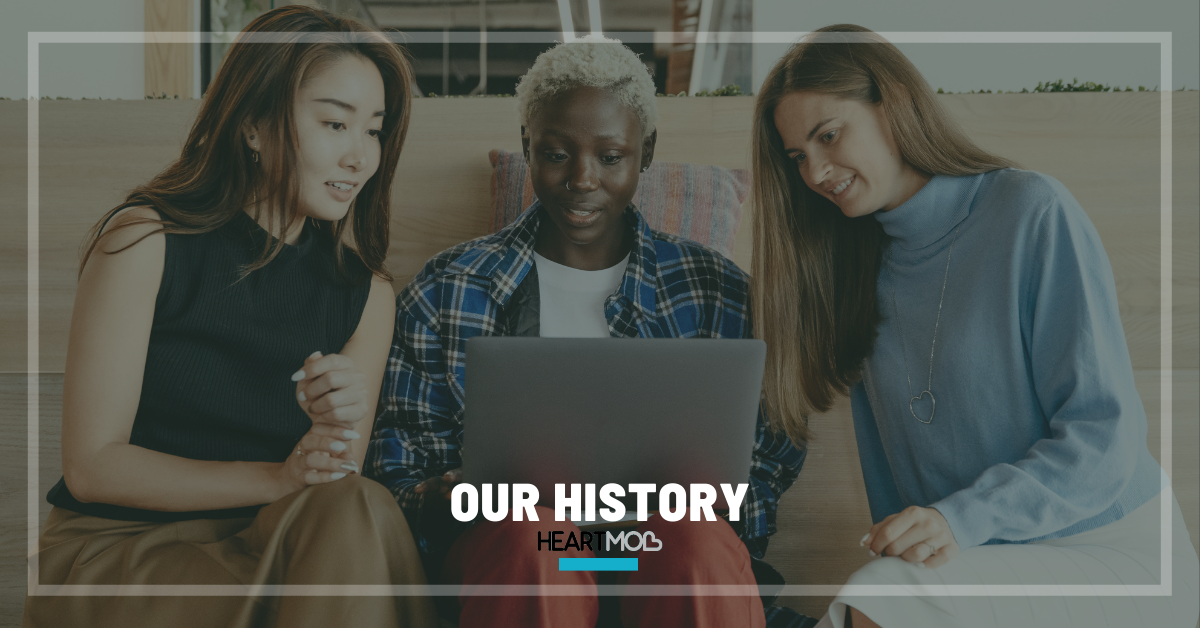 HeartMob was launched as a pilot in 2016, following in-depth interviews with survivors of online harassment and extensive prototyping and testing processes. The platform is a project of Right To Be (formerly Hollaback!) and it was co-founded by Jae Cameron, Jill Dimond, Emily May, Debjani Roy, and Courtney Young. In 2020, we started a redevelopment process to redesign the platform, and have rolled out a series of updates to improve user experience.  (Learn more about how HeartMob works here)

Since Right To Be’s founding in 2005, we (the leaders of the organization) have faced online harassment. At first the harassment took the form of emails where we were called “carpetmunchers” and “dirty lesbians,” but eventually we began receiving rape and death threats. In 2013, fed up with being harassed, and angered by the harassment we saw happening across the internet, we decided to do something.

The premise for HeartMob is simple: we want to fight fire with water. Bystander intervention is a best practice for addressing all forms of violence, but so often when harassment happens in person people aren’t around, and if they are around, they aren’t sure what to do. The internet solves some of these problems: when online harassment happens, people are almost always around and if they aren’t around, they can be quickly summoned to show up. Through HeartMob, people can ask for exactly the kind of support they need, when they need it. Our goal is to reduce trauma for people being harassed online by giving them the support they need -- and in doing that work, create an army of good so powerful that it can disrupt and ultimately transform the hearts and minds of those perpetuating online harassment.

In 2020, Right To Be partnered with the International Women’s Media Foundation (IWMF) and the Coalition Against Online Violence to re-design and expand HeartMob to support women and gender-expansive journalists experiencing online threats. We conducted a series of focus groups with a group of women journalists to understand the usefulness of existing HeartMob features and what changes or new features would better support them.  Journalists can now create a special “journalist account,” as well as tag their stories as journalist stories, allowing for more specific and attentive support.  They can also access the Coalition Against Online Violence’s Online Violence Resources Hub, a project of the IWMF with ICFJ.

The partnership between Right To Be and IWMF to develop these tools and the recent updates to the platform have been made possible by the generous support of Craig Newmark Philanthropies.